One of the most exciting part of a growing baby is introducing them to solid food! We started solid foods a week before Joshua turned 6 months.

It all started with my son being interested with everything that we ate during meals. He would look intently with his mouth swallowing saliva and moving like it is motioning to eat. He was doing this as early as 4 months, but i refused to give him any solids.

But about a week before he turned 6 months, I was eating oatmeal for breakfast. Joshua just stared following my spoon from the bowl to my mouth! Poor guy, he really was showing interest to try. That day, I decided that he would try the last few bites of my oatmeal. He finished what was in the bowl and even sighed for more. It was a sign that he was ready for more!

So here comes the adventure of introducing my son to home-made solids. On our first week we did just one meal a day of just oatmeal and powdered cereal. He did very well with that, and on the second week we added lunch into his diet! Lunch was the exciting part because this is where we were experimenting what he could try. Initially we went for boiled squash and breast milk. He loved it. We had that everyday for a week. By the third week, Joshua was having 3 meals a day! He had such an adventurous palate!

Now, let me also be clear… Do not take away milk in the equation just because our baby is eating. One mom gave that tip of making your baby drink breast milk before and after a meal. As a recollection to my blog, Breastmilk is a SUPER FOOD. It is more nutritious than any food we can give our baby, so do not neglect giving it (unless you really want your child to wean).

So here are some recipes of home made food that Joshua enjoys. There are endless possibilities!

Boil these vegetables in water (I use filtered water) until it is cooked. Then set aside and place in blender or hand mash the vegetables with breast milk. You can even add malunggay, broccoli, etc. The possibilities are endless! You can also put a little beef broth to flavor it further.

Boil this in water. When it is cooked, place the pear and apple cubes in the blender. Get about 1/4 cup of the boiled water (because the nutrients are still in it), and blend this with the pear and apple. Place in a separate container and chill in the refrigerator. Serve chilled when your child wants to take a snack or merienda.

I am also careful about feeding my little one sweets before his tooth even comes out! Yes, he has not tried ice cream or other sweet stuff. Even the powdered cereal, I prefer the less sweet ones and mix it with oatmeal. I suppose training your child to eat healthy and choose vegetables and fruit over junk food at this early age can develop his eating pattern in the future.

Oh this is such a fun stage! Time to get creative in making homemade food. I have decided to go homemade because its free from preservatives, and ultimately more nutritious than the products found on the shelf of the grocery. 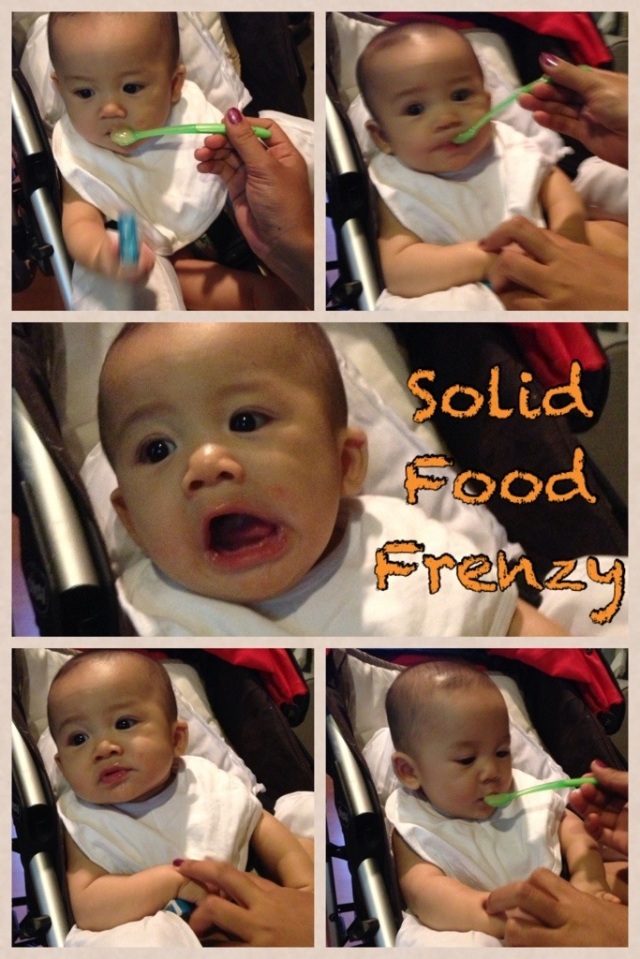