Sarangani is a beautiful province located In southern Philippines. It has mountains, waterfalls, rivers, coastlines, and the beautiful Sarangani Bay. The biodiversity in this province is rich, but is in need for protection.

About 4 out of 5 sea turtle species are actually laying their eggs in its coast. Mostly Olive Ridley, Hawks Bill, and Green turtle are still hatching on beaches of Sarangani.  In Maitum, they have two turtle hatcheries or turtle sanctuaries.

I brought Joshua for the first time to the Turtle sanctuary and it was his first time to see so many little hatchlings. I explained to him that turtles give birth to baby turtles by laying eggs.  And when they are ready, they are able to get out of the egg and go straight to the ocean. The ocean is their home.

There were baby turtles in the aquarium and he saw them swimming around. He found them really cute! Joshua got more excited when I told him he was allowed to choose one turtle that he would help get back to the ocean.

He was a little scared to hold them because they were moving so quickly. Finally he got himself one turtle that he would release to the wild. 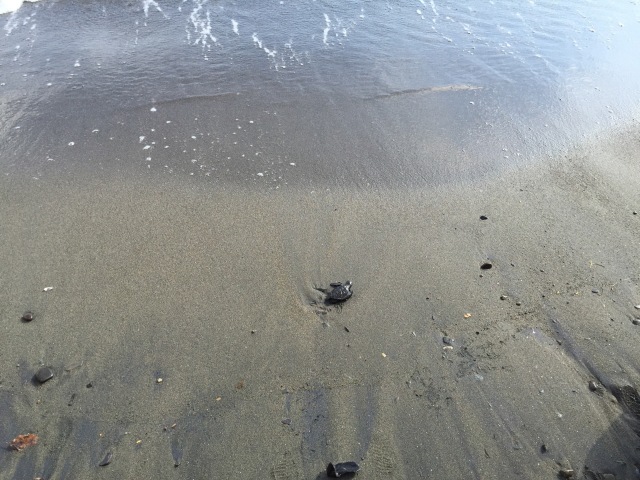 We released our chosen turtles on the beach and they crawled towards the water and swam. Josh watched his turtle go. He was concerned actually if his turtle will be okay. They looked so small in front a huge ocean. Reality is only 1% per batch of hatchlings survive. (It is an alarming low percentage!)
This is why Josh now knows we have to do all we can to help turtles survive. In fact, he cried hard when we left. He wanted all the baby turtles released in the wild. It actually was the right thing to do. Marine scientists will concur that the sooner the turtles get to the wild the better are their possibility to fend for themselves and survive.

Sarangani was our teacher that day about turtles and our environment. I believe if we pass on these values about caring about the environment at a young age, children will grow up doing so. I was about 8 years old when school explained the hole in the ozone layer causing the greenhouse effect. Garbage also directly correlates with destruction of the environment and adding to carbon footprints. That information has impacted me personally.

Now, I want my children to have that same values and conviction of loving and protecting the environment. And lucky me because my children will learn a lot of these in Sarangani.