“Not everything are found in books, leave room for mother’s instincts!” — This is golden advise I got from one of my baby showers.

My friends and family know that I am the type of person that likes to research. Google, baby center, whattoexpect.com, and many other resources have been my guide in caring for my baby. Of course, there are also advises from friends, family, my pediatrician and other mommies. These become your support system as you rear your child especially if you are a first-time mom. I particularly enjoy knowing if my little boy is meeting his milestones. So far, he is pretty smart little guy and advance for his age. For that, I really praise God.

At four months old, some babies have slept through the night (6-8 hour sleep).This means, they are able to sleep through without nursing. Many moms I know have that experience with their babies. Unfortunate for me, Joshua is not sleeping through the night just yet. We would prepare sleeping time at 8pm by bathing and he would be in zzzz land by 8:30pm. When I shared this schedule with other mommy friends, I learned my baby slept the latest. Theirs would be sleeping by 6:30pm or 7pm! Hmmm… could there must be something wrong with my style???

You see Joshua developed his sleeping pattern and it was led by him. Usually he would wake around 5 am then would sleep again around 7 am for 30 mins. Then after bathing he would sleep around 9am until 11 am or 12 noon. After, he would take an afternoon nap by 1:30pm until 3pm. And another last nap at around 5pm before the night time sleep at 8:30pm. But even at 8:30 pm his longest stretch is really until 12 midnight (so only 3.5 hours). After that he asks to be nursed every 1-2 hours until 5 am. You can tell, I still don’t get a lot of sleep!

Now, I’ve been seeing these write ups on Sleep Training… also using CIO (Cry it Out) method to get the baby to self sooth and he will eventually sleep. I began to really feel pressured that Joshua was not sleeping through the night and that maybe I should start being strict with him and applying the CIO method.

For about 2 nights, I applied what was in the books to get him ready for sleep training. That included bathing him, getting the room suitable for sleeping, nursing him and putting him down. I actually get to achieve this. The difficult part is his first wake… it was suggested to just leave him and he will just put himself back to sleep. If he cries, just let him cry. Moms can talk to their baby and pat them gently and leave them. So I tried this method. Man, I have to say, my son can cry longer than 20 minutes! He was also using his very modulated loud cry with tears and all! He really was not happy. I could not help myself from carrying him and he would still sob and it took a while for him to get over it… But I really believed, I have to start training him or else he will never get this milestone! He might be the only kid who does not sleep through the night at 4 months!

Two nights I attempted this. Then on the third day, we noticed something wrong with Joshua. His voice became hoarse. He was losing his voice from all the loud crying and grunting. Worst part is, on the fourth day, his hoarse voice was accompanied by him being fussy and crying a bit more than usual. Of course I attributed this to his daddy who had the sniffles (hehehe).

I continued with the so-called “Sleep training”. However, I began feeling that this whole idea of training my baby is just too much for him. Instead of me getting rest, I was getting more tired because Joshua was crying more, and requiring more of me! That evening, Joshua started developing a low grade fever and was really needy of me. I started to pray and asked God to restore my son’s health back. I also asked God to guide me on how to care for my son.

God gave me an insight to let go of that milestone checklist. Joshua will sleep through the night in his own good time. No need to rush him. He is just an infant. He will get there when he is good and ready. As a mom, I should not feel pressured with what the books says, or feel inadequate when sharing notes with other moms. That night Joshua slept in my embrace. I wanted him to feel secured and comforted, and that his mommy will not leave him alone until he is ready.

So, for now, I am adjusting the night sleeping time of Joshua to an earlier time of 730pm. But I am not going to let him cry it out anymore! Im just going to wait, and prayerfully watch the day he will be ready to sleep longer, to nurse less and to reach his milestone! 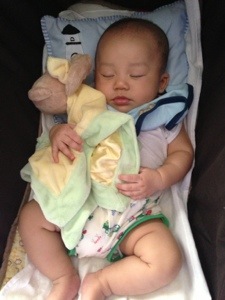 “For the vision is yet for the appointed time; It hastens toward the goal and it will not fail. Though it tarries, wait for it; For it will certainly come, it will not delay. (Habakkuk 2:3 NASB)