Joshua does not fail to amuse me… He is one smart little ranger (this is what his uncle Ken would call him). He was only 2 months when he started to to do tummy crawl. At 3 months he can open and close his hand when we would show him our fist opening and closing. He also got the gist of the “animal sound” game on my iphone, where he had to touch the screen in order for the animal to make its sound. He watches what we do, and imitates us.

Just the other night, Joshua woke up in the middle of the night. He was wide awake and did not want to go back to bed. Instead I decided for him to hang out with us in the room. He was resting on a pillow and watching tv just like his daddy. He just kept looking back and forth between the tv and his dad. Later, his eyes was just glued on his dad who was eating pakwan (Squash seeds). A little later, I found him on his tummy exerting effort to crawl. So I placed my hands at the sole of his feet to help him with his crawl. He pushed hard to get his way to guess where? He crawled from his side of the bed to his dad’s side! 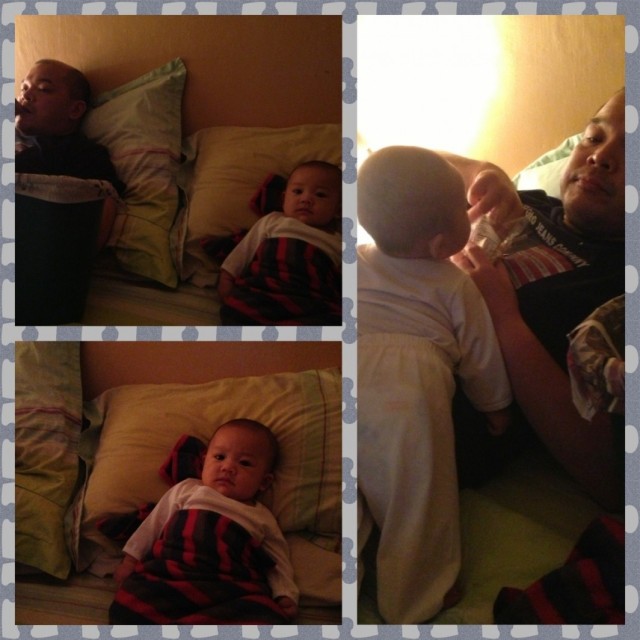 A little later he stood by his dad and kept looking at what he was doing. He was observing his daddy cracking and peeling the seeds and chewing it. Later, Joshua understood that daddy seemed to enjoy it, and was constantly eating it. He became interested that he grabbed the bag and tried to give himself some… 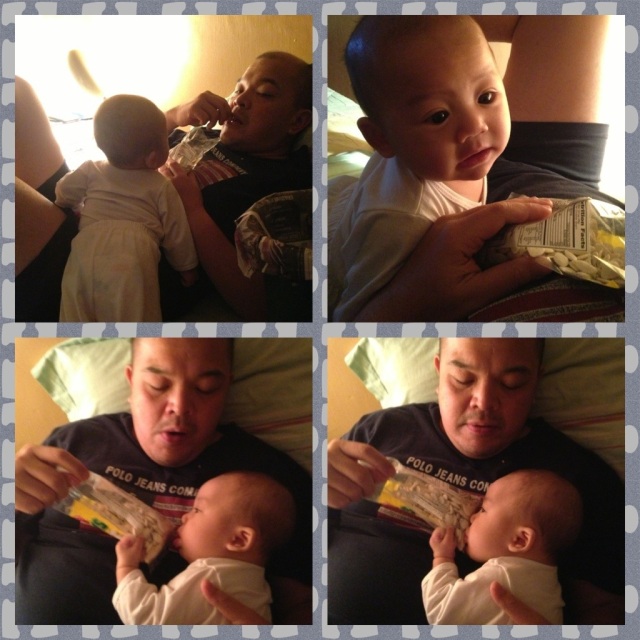 I was taking these photos and giggling while watching how Joshua was trying to imitate his dad. What dada does, he wants to do. He also does this when Steve works on his laptop, Joshua would come near and push himself downwards so his fingers could touch the keyboard. He has a fondness of his Dad, that he wants to try what his dada is doing.

What I saw just stuck in my head like God was showing me a life lesson. Parents have a great influence over their children. Joshua observed what his Dad was doing and followed it. It was not his dad’s words that he was imitating, but his dad’s actions. This reminded me, we as parents have to be good examples to Josh. “Actions speak louder than words” suddenly meant very real to me. Parenting should be intentional not a “que sera sera – whatever will be will be” kind.

God is showing me that our child will follow us… Our good traits and including our bad traits. So, we need God’s power to model righteousness so he would grow up to live in righteousness. We can’t teach this to our son, apart from God.

I realize as parents, we need to stay connected with The Lord. How else will we be able to raise our kids in the knowledge and love of God, if we starve ourselves from reading the bible and exercising love? I admit that with the demands of a young infant, I can find very little time for quiet time. But when I do, I feel empowered and energized. I can have more quiet time if I look at my Facebook less. Hahaha. It’s true though, God wants me to grow as a parent. He is teaching me many valuable lessons through his Word. So, I am writing this as a declaration that I will continue to have quiet time so I can grow in knowledge and love and that will make me the best mom I can be for my son. So help us God become good examples of your grace and love!