The daily routine of my 16 month old boy includes alot of play.  We use toys, we do role play, we have books and story telling, lots of hugs, affirmation and laughter. We have toys that are battery operated and makes alphabet sounds and music when certain buttons are pressed.  It has helped Joshua understand cause and effect. It also helps him with the mastery of his fingers and hand motor skills. Music also communicates an idea more creatively. Its good to have music and sounds as part of the play.

What amuses me the most, are the “accidental toys”.  These are household items or stuff I intended to throw, but in a surprise has become a valuable toy in the eye of my little boy.
One of the most enjoyed items Joshua has been playing are bottles. Shampoo bottles, lotions bottles, water bottles, and other toiletries are actually fun to arrange and rearrange. Joshua can actually play a while with these items as his imagination takes over.  He stacks them, rearranges them, packs them in boxes and likes to discover the object’s shape and function.

Another one he enjoys is making the monoblock plastic chair his ship.  We make him stand on it and we just push it around the dining area as if he was the captain sailing away. 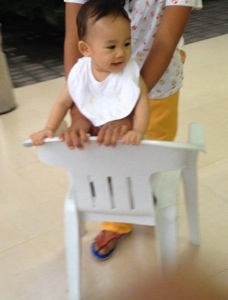 Recently, my husband received a gift that has become one of our objects of creative play. Its a wooden set of coffee confectionary. Joshua has made it his imaginary kitchen and role plays that he is cooking up a great dish. We have fun pretending to be chefs and making up recipes. I really enjoy watching him pretend to stir the food and take a taste with the spoon as he says “uhhhmm!”

Another toy that has become cool is just a box. His nanny saw that he would fit inside that box. She puts a ribbon at one end and made Joshua sit inside. With the ribbon we dragged him around the house making the box his make shift car/jeep. Its been a lot of fun! 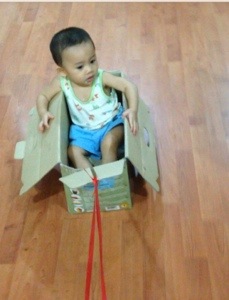 Playing does not need expensive toys all the time. We can just look at our closet or pantry and find lots of interesting stuff for our toddlers to play with. What we parents need are just a bit more imagination and creativity…