One of the things that parents pray for is to have their children in the pink of health. When our little ones are sick, they require extra attention and care. Usually our sick babies are needy and often fussy and grouchy.

In the last 11 months, Joshua has recorded three visits to the doctor for being under the weather. First one was the strep throat and nasal drip. This happened when we were trying the “Cry It Out” method for sleep training at 5 months. We never got to sleep train completely because he scratched his throat from screaming and crying because he did not want to sleep by himself and wanted to be held. With all the crying it caused his nose to get stuffy. Since babies do not know how to blow their nose, we had to take out the phlegm by sucking it with a nasal aspirator. Also he had to take paracetamol for the first time.

The second time was when Joshua was 7 months. Everyone in the household got the flu. Joshua was over powered by the virus that he started to have fever, runny nose, and cough. This time, my baby needed to take antibiotics and nebulize. He was a good sport about that and he did not mind his medicines. 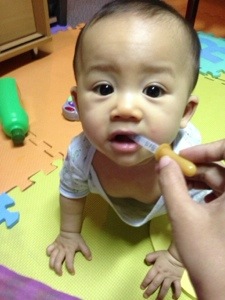 Just recently, Joshua started getting fever for 3 nights. He was very needy and cranky. We had him checked for UTI and thank God he was cleared from that. It was something else causing the fever. We started to take antibiotics just in case the infection becomes bacterial. But after 3 nights of fever, a rash started to form on his chest then on his back. Fever was gone but the rash on his body increased. Our doctor was out of town, so the best resource a mom can have is the internet. The symptoms appeared to be like the measle-like virus called Roseola.

Since the rash appeared on a sunday, no pediatrician had their clinics opened. My husband who happens to be a health conscious person was irritable with me. We often get stressed when sickness falls into our family. He gets stressed with the disease and the medical services. Meanwhile, my stress is not often on the disease but how my husband handles this kind of stress! Hahahaha…

When sickness befalls on us, I claim healing from God. I lay my hands and pray and believe that God has power to heal. God’s word teaches us,
James 5:13, 15 ESV

“Is anyone among you suffering? Let him pray. Is anyone cheerful? Let him sing praise. And the prayer of faith will save the one who is sick, and the Lord will raise him up…”

I have not stopped claiming God’s shield over my son’s life and health. He is the ultimate healer of any sickness. And True to God’s faithfulness we have confirmed that Joshua has the roseola, and this viral rash will just leave my son’s body naturally in 2-3 days.

When my baby is sick, all my other plans are cancelled. Despite the many things I missed out over the weekend, I do not regret missing them. I have been given the privilege and blessing to be the mother of my baby. So I take being a mom quite seriously. And only mommy can make a sick baby laugh and smile like this.